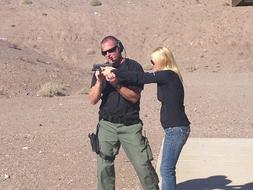 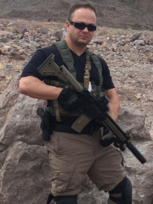 Ron holds instructor certifications in Nevada, Utah, and Florida.  Ron is certified with the NRA in the following:

Ron has trained with local law enforcement in MACTAC and active shooter based scenarios, with an emphasis on extraction and force protection groups with Tactical EMT/Medic certification from Tactical Medics Group LLC (tacmedgroup.com). He also holds numerous tactical-based class certifications on transitional CQB and violent encounter training and has been extensively trained in aggressive tactics for home invasion protection and retreat.
A Firefighter and AEMT for his local fire department since 2000, Ron is also a Heavy Rescue Technician certified in the disciplines of:

Additionally, Ron is a FEMA Rescue Technician, committee member of the first ever County Ladder Truck Operations manual and Ladder Truck Academy, and has experienced multiple major high rise and large structure fires, including being a first responder to the Monte Carlo Casino fire in Las Vegas, NV.​

Jeb is a U.S. Navy Veteran of operations Southern Watch, served  in the Persian Gulf and with Restore Hope in Somalia. After the attacks of September 11, 2001, Jeb reenlisted and served in Operation Iraqi Freedom. Jeb has 14 years of combined active and reserve duty service as a Seabee Equipment Operator, first class (Seabee Combat Warfare Specialist).

After leaving the Navy, Jeb entered into law enforcement and has been employed as a police officer since 2006. Jeb began his career in law enforcement with four years in patrol, followed by five years as a member of his department’s SWAT Team. He is an experienced instructor and training coordinator and is currently certified as a FBI and NRA certified Law Enforcement Firearms instructor and a Simunitions force-on-force scenario-based training instructor.

Jeb has coordinated and led instruction and mentorship programs with an emphasis on Active Shooter / Force Protection classes and contributed to the development of his department’s Basic SWAT School and the Urban Law Enforcement Sniper program.

Jeb is a member of the NTOA, National Tactical Officer’s Association, and the NRA, National Rifle Association. Jeb has Sniper Certifications from the Las Vegas Metropolitan Police Department SWAT Team, as well as from GPS Defense, which is a government contracted sniper school and the Reno Police Department SWAT Team. While assigned to the SWAT Team, Jeb performed the following:
- Took part in hundreds of tactical missions

- Served as an entry officer

- Served as a gas and less lethal officer

- Served as a Sniper officer

- Served as the Team Training Coordinator

- Served as an Assistant Team Leader

While assigned to SWAT, Jeb has been responsible for training patrol officers in his department in the areas of:
- Active Shooter Response